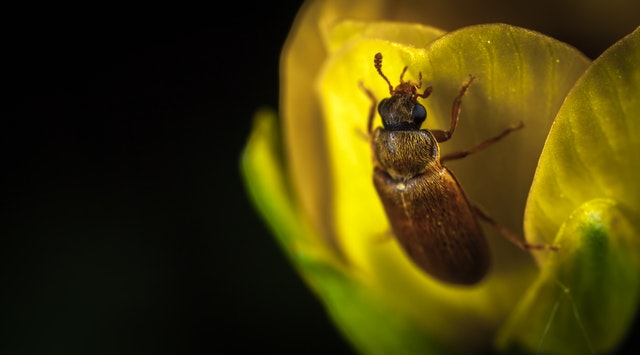 Here’s another creepy varmint we’d rather not find in our homes! The grain beetle, next to the flour beetle, is the kind of nightmare you don’t want to find in your pantry at home or within your restaurant. These flat, brown or dark red-coloured varmints are typically 2-3 millimetres in length and have large eyes that make their head appear pointy. Their small and flat bodies allow them to sneak in between cracks and crevices perfectly. Some of the most common types of grain beetles that reside in Canada such as the sawtoothed grain beetle, the merchant grain beetle, and the rusty grain beetle to name a few can withstand our cold northern temperatures, making them a year-round threat to our food.

Like the flour beetle, the grain beetle’s diet consists of similar foods that we like to eat, such as cereal. However, the grain beetle will also eat oats, wheat, barley, and several processed and packaged foods that we take home. Some species of beetles, such as the merchant grain beetle, prefer eating oatmeal, brown rice, bran, dried fruits, dried meat, seeds, breakfast cereal, and even pet food.

In ideal conditions a grain beetle can live up to 3 years rather than their adult 6-10 month lifespan. Affected grains will overheat if the infestation is too much. An entry and exit hole for the beetles in food that is improperly stored and sealed is another sign of an infestation. The biggest sign, of course, is finding one crawling around near your favourite box of cereal!

While grain beetles are awful to find in your own home, they are not poisonous or bite or sting. However, their presence does contaminate the food they’ve touched or nested in and it’s really where the cereal or food product was made or bought that’s at greater risk. Grain beetles will infest granaries, mills, warehouses, and retail buildings, making them lose both business and profit over time.

For prevention’s sake, keeping the pantry clean and sanitized while storing food in tightly sealed containers such as metal, glass, and plastic can be enough to keep an infestation of grain beetles from getting out of hand. However, if you’ve discovered them in more than one place, or your location fits any of the list in the above paragraph, give your Pest Boss a call for extermination. We’ll get you, varmints!