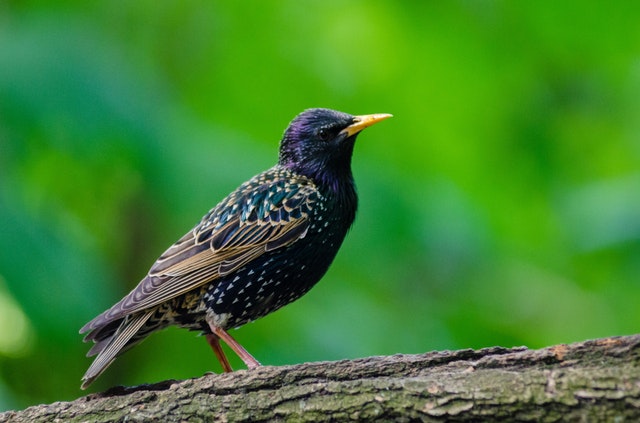 Contrary to popular belief, the starling is not native to Canada. It is, in fact, another one of the European birds brought to our country back in the 1800s by people who thought they’d be helpful to crop production. Nowadays, we have better technology to keep our crops going and, unfortunately, more pest problems to deal with, including the starling itself.

While the starling has some beautiful plumage, with its purple and blue and speckled feathers, it is still technically considered to be a pest. In fact, a starling can be quite an aggressive bird! They’re especially so if you get too close to their nest or clutch of eggs.

Starlings are birds that can nest anywhere conceivable, including your own backyard and house. The closer they are to their food source (insects, which they will usually pull out from the grass of lawns or fields), the happier they are, but also the more inconvenient they can make your life.

Unlike some bird species, starlings will not remove or relocate their nest or its materials once it’s been built, which can create significant fire hazards to your home or commercial building. These nests may also clog up gutters and drainage pipes, leading to water damage as well! And like any birds, starling droppings can create a huge mess that not only makes your home or business’s exterior look bad, but also the uric acid contained in their feces can and will corrode metal and stone that were used to create the building.

It gets worse. Starlings are notorious for the spread of diseases such as Histoplasmosis, a fungal lung disease, and TGE, a stomach flu virus. The former is spreadable among humans while the latter is a bigger risk for livestock farms, especially among pigs. Woe to the airplane that encounters a starling as well! Should a starling come towards the plane’s jet engines, it can not only mean severe damage done but also put everyone on the plane at great risk.

So, that’s why starlings are a pest problem. If you’ve discovered this bird species near your building or home and it’s the springtime (their nesting season), call your local Pest Boss. We can remove their nests and humanely relocate the starling(s) where they’re less of a pest problem and a health risk. We’ll get you, varmints!