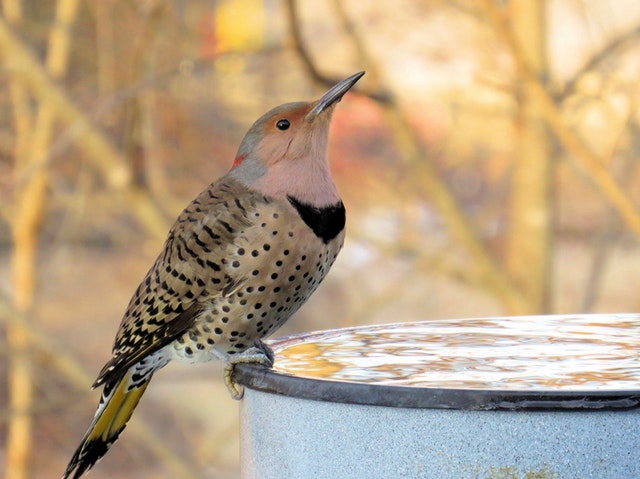 Let’s talk about the flicker.

No, we’re not talking about the photo website Flickr—that’s a totally different ballpark! This is a type of wildlife pest you’ve probably heard very close to you.

The flicker, specifically the Northern Flicker, is a familiar wild bird on the Lower Mainland, easily discernible by its spotted plumage and, in the case of males, a splash of red either on their head or by their beak.

While flickers are actually quite pretty to admire when you’re outside and have the morning to yourself, they are similar to the starling in that they are experts at making their nests in inappropriate places. Not content to live near farms, flickers have been known to impact urban buildings and build their nests in chimneys, creating both messes and fire hazards in the process.

Flickers are classified as migratory birds and are therefore protected by the Migratory Bird Treaty Act, a law enforced in Canada that prohibits people from killing or harming flickers. That means proper and safe wildlife removal is required as opposed to outright extermination (which is illegal in the case of most bird species). That being said, despite their migratory habits they tend to stay in Vancouver and BC’s Lower Mainland year-round (it’s all thanks to our awesome climate!).

If you hear the call of a flicker (it sort of sounds like “ki-ki-ki-ki!”) very frequently in a civilized area, such as in your backyard or near your commercial building or even a construction site, it could be a sign their nests are right by you. Another big sign they’ve decided to make your home their nest is the rat-a-tat-tat you expect from a woodpecker—because the flicker is a variation of woodpecker!

An intense presence of flicker nests, debris, and droppings (the typical signs of a bird infestation) may also mean you may have an insect infestation on your hands. Flickers are the only type of woodpecker that feeds frequently while on the ground, as opposed to mid-flight. Ants consist of 45% of the flicker diet, followed by butterflies, moths, beetles, flies, and moths. They do eat berries, fruit, seeds, nuts, and snails, but insects are the staple of their diet. So if there are lots of flickers hanging out near your home or commercial building, it means a massive insect population is nearby and there’s more than one varmint for you to worry about!

Call your local Pest Boss for safe and immediate bird control and wildlife removal if this looks and sounds like your current pest problem. We’ll get you, varmints!