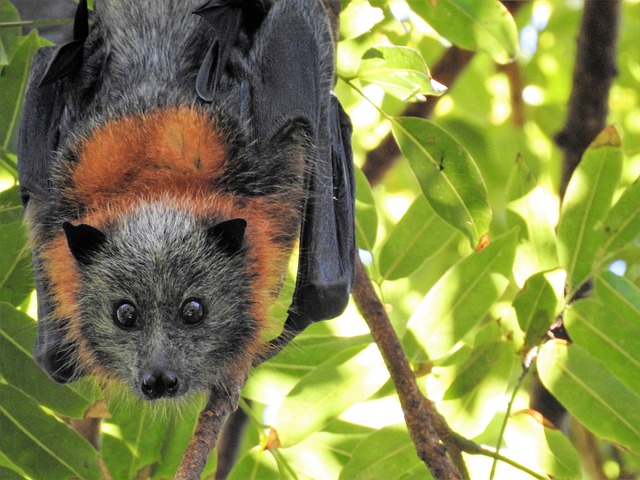 It’s almost Halloween now, meaning we’ll be seeing lots of ghosts, goblins, jack-o-lanterns, and bats. Let’s talk about the latter for a bit, shall we?

Bats are indeed a type of pest we offer removal service for at Pest Boss. While our pest control company can and does eradicate Count Dracula and his pals from rooftops and attics, we thought it would be worth mentioning some fun facts about bats that not many people may be aware of. Let’s take a look at one of our favourite winged varmints and see if we can feel less spooky about finding one in our homes!

According to BCBats.ca, there are 16 known species of bats that live in Vancouver BC’s Lower Mainland and on the Sunshine Coast. A few sightings have consisted of rarities that are non-native to the West Coast, but nothing has been reported of these ever since then.

The most common bats that we see in the Greater Vancouver area are: the Townsend’s Big-eared bat, the Hoary bat, the Big Brown Bat, Yuma Myotis, the Californian Myotis, the Long-legged Myotis, the Little Brown Myotis, and the Long-eared Myotis. Each of these bats have their own distinct preferences in terms of where they roost in summer and winter.

Another bat not native to BC decided to make a pit stop way back in 1938. The location? New Westminster. The bat in question? A Big free-tailed bat. Most of the bats we’re most familiar with prefer to nest in warmer climates, although in BC there are certain areas and cities where the temperature and climate are just right for bats. Accidental reportings have also taken place for the Mexican free-tailed bat and the Canyon bat (a few more rare types of bats to see in BC).

Some Bats in BC are Endangered Species

Approximately half of the 16 bats we mentioned previously are listed as vulnerable or threatened, according to BCBats.ca. The reason? A fungal disease called “white nose syndrome”, which spread itself across North America in 2006. 6 million bats were killed as a result of this disease. Since then, a network has been developed called “Got Bats?”, which started out originally as a website created by the Ministry of Environment.

There’s Another Holiday that Celebrates Bats!

While Halloween does use the bat as a decoration, there is in fact a date that honours and celebrates bats. That day is April 17, also known as Bat Appreciation Day.

There are many ways you can celebrate this holiday. You can try building and hosting a bat house in your yard and registering your bat house with BCBats.ca to join the Annual Bat Count every June. You could also consider joining in with community efforts to preserve ideal bat habitats (old trees and buildings, and bodies of water) on your property and in your city. If you see any unusual behaviour such as bats flying during broad daylight, reporting on it to BCBats.ca is also a kind of celebration because you’re helping them and your community as a result!

As a matter of fact, bats can actually see as well as humans! The reason you only ever catch sight of them at night is because they can be sensitive to light—that does not mean they are blind. While they do use echo-location to identify their prey (bugs), that does not mean they are blind either. The fruit bat, while not a resident of BC specifically, is not blind either. They see better in low-light, like cats do, and they can also see in colour.

Bats Groom Themselves as Often as Cats

Speaking of cats, bats clean themselves a lot more often than you would think. A bat is not as dirty and disease-ridden as you assume they are—what makes them dirty is, in fact, your dirty and dusty attic and home if they decide to roost there. A bat grooms itself as often as a cat does per day. That’s why their fur has been often reported as soft to the touch.

Bats Can be Their Own Pest Control Service

The bats we know of in BC can and do feed on several of the varmints we specialize in exterminating at Pest Boss. That’s right, bats eat their own weight in insects every night and are thus their own special form of pest control. Mosquitoes, June bugs, spiders, and moths are all their favourite foods, and several other night insects and arthropods are the staples of their diet. That means less diseases like West Nile Virus and Malaria to worry about, plus less damage done to our forests and agriculture. Thanks, bats!

“But what about vampire bats?” you may be asking. Well, even the vampire bat’s name is a misnomer, to a certain degree. While, yes, blood is a part of their diet, humans are not the vampire bat’s diet so much as wild animals. And even so, a vampire bat only feeds off a couple teaspoons of blood—and they get it by licking the wound, as opposed to biting the animal. They’re not nearly the vicious bloodsuckers they’re shaped out to be at Halloween.

No, Bats Aren’t Going for Your Hair

A widely spread idea about bats is that if they fly near your head, they’ll get tangled up in your hair and they do this deliberately. The truth is that they’re more after the mosquito or moth that’s flying above your head than anything else! This hair-raising idea is a common myth that has been busted time and again, but it has stuck  around regardless (we have TV and the media to blame for that, honestly).

Contrary to popular belief bats are not the ‘carriers’ or cause of rabies as people assume they are. The instance a bat has rabies is also rarer than you would imagine. Bats are like any animal in that they can catch the disease and spread it through their scratches, bites, and saliva. In reality, people are more likely to contract rabies from household pets than from contact with a sickly bat.

Regardless, the possibility of rabies is still a present threat and unfortunately bats can spread the disease if you’re not careful. It’s very rare, but it can still happen. Bats can also transfer other pests such as ticks, fleas, and mites. This and the possibility of other diseases such as  is why regardless of whether or not they are native to BC, any bat infestation in a home or building must be approached with caution and professional care. Attempting to eradicate a bat yourself is asking for trouble since they’ll bite and scratch out of fear (not to mention, according to the BC Wildlife Act which protects bats, it’s illegal).

We’re still learning so much about bats even to this day. One thing we know for sure though is that if your home has bats, or there’s too much guano (bat poop) and noise in your home, help to move the bats to a different location is available. Give us a call if you need safe bat removal from your home. We’ll get you, varmints!